French Food. It is thought to be fussy, complex, small-portioned, full of butter and cream, and in general, delicious.

This might be the case for many Vancouver French restaurants. But Left Bank, open just a few weeks on Denman St, just below Robson, is setting out, much as its name implies, to do French food a little off the beaten path… or rather the beaten chemin (groan).

Left Bank comes with a pedigree. John Blakeley is a name synonymous with French food in this city. His Bistro Pastis on 4th Ave has long been the place to go for classic French cuisine.

Blakeley previously worked at 752 Denman St (then called Cafe de Paris) in 1977 as youngster—it was one of his first jobs. The location has great sentimental value for the Frenchman. He’s tried to make a go of it in this location before, as Le Parisien, but he has now elected to shake it up again.

“I want Left Bank to be French without being French,” he says. Named for the La Rive Gaucheneighbourhoods on the left bank of the Seine, Left Bank is an effort to create food that doesn’t always follow tradition, much like the artists that inhabited that part of Paris.

There are two menus: a tapas-y bar menu, much like you might expect to see in a café in Paris, and a simple bistro menu with a handful of starters and entrees, and three desserts.

Simplicity is the key here. The best kind of food is food that is done simply but well, using fresh ingredients, prepared with care. And Left Bank delivers. Chef Spencer Watts uses simplicity and detail, alongside French techniques and West Coast ingredients to create a menu that is casual, unfussy, and delicious.

The bar menu features French classics like charcuterie and cheeses, but also has ceviche, Asian-inspired sticky ribs, and a spicy albacore tuna cone. My favourite bite from this menu was the grape and goat cheese truffle. Looking like tiny speckled eggs, green grapes are rolled in chevre, then in spiced almond crumbs. They look delicate, but explode with sweetness and tang in your mouth.

Starters follow a similar pattern: again, you’ll find classics here like carpaccio, mussels, and a take on a caprese salad. But there’s also a dreamy crab roll–succulent, moist crab, enrobed in a crispy, nori shell, accompanied by a fingerling potato, and grapefruit sections. Chef Spencer describes it as “crab on a picnic.”

Moules are the yardstick upon which any French restaurant should be measured, and these mussels are plump and moist, swimming in a spicy-sweet coconut broth with a hint of red curry and lime.

Mains borrow some inspiration from Morocco, in the form of a lamb tagine. But there is also salmon, rustic, slow-cooked chicken, a nod to duck confit, and a ling cod served on a bed of light ricotta agnolotti. A great example of French-meets-simplicity is the hanger steak. Simply sliced and served with a Szechuan peppercorn sauce and frites, it looks deceptively simple, but is tender, and rollicking with the flavor of the peppercorns. The real star, however, are the frites. Properly cooked, these are no French Fries. First, they are hand cut, and then deep-fried, slowly. They are then cooled down, and fried again at a higher temperature. This makes them crispy on the outside, and fluffy on the inside. The finishing touch? A dusting of ground black sesame seeds and sea salt. 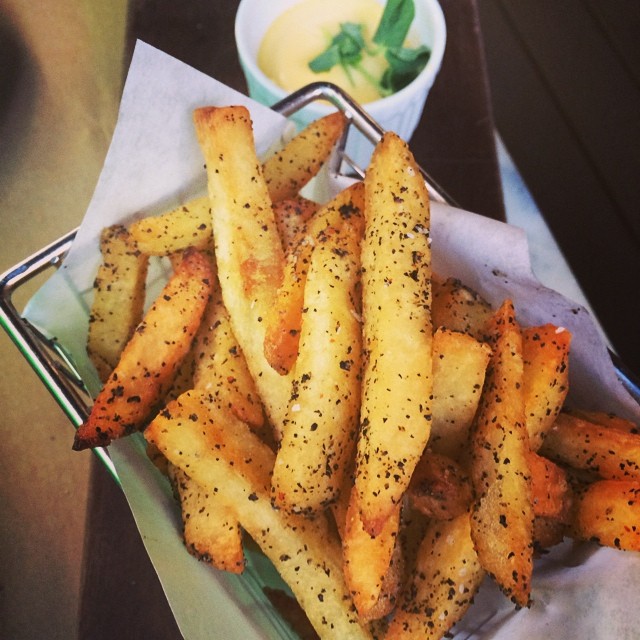 There are three desserts. The coconut panna cotta fell a bit flat for me. The black sesame cake creates a sense of drama, but didn’t quite deliver on flavour.  Skip the panna cotta and go straight for the Chocolate Marquise with the Green Tea Ice Cream.

There’s not a ton to be said about the décor. It is, I imagine, a little like what a Paris Metro station would look like in a dream world: tons of natural light bouncing off of gleaming white tiles, punctuated by shiny red accents in the banquettes and every second chair. It’s worth noting that Left Bank has obtained the first laneway patio permit in the West End. Sitting out there is very pleasant, with the exception of the Domino’s delivery guys that you see racing down the alley approximately every thirty seconds.

When I go to a French restaurant, I expect the service to be good, and Left Bank did not disappoint. Many of the servers were French, and they were friendly and attentive.

I’ve been to Left Bank twice, and both times, it was sparsely populated, which, quite honestly, is a shame. While j’adore Bistro Pastis the same as the next guy, Left Bank has a more casual, laid-back vibe that feels more accessible. It’s worth going for the pomme frites alone.

Saturday, Sunday and Holidays: from 10:30am for brunch through dinner